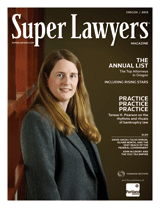 By the time a case makes its way to an appellate attorney, the record is closed. There are no more witnesses to grill; no provocative evidence to expose. And that’s just the way Kevin M. Fong likes it.

Some might consider the penetrating analysis that appellate work demands to be a ho-hum endeavor, but for Fong, a few minutes before a panel of appellate judges is a delight.
Read the article

Since its founding in 2005, Yelp.com—a website where consumers review everything from cappuccinos to car mechanics—has published more than 5 million write-ups of local merchants. But in the past 12 months, its online reviews have also triggered at least three defamation lawsuits.

Welcome to the Web 2.0 world of user-generated content, where positive reviews can attract new customers—but negative reviews may inspire the subjects to head to court.
Read the article

Mental Health and California Law: A Guide for HR Professionals

Every office has its personalities. There’s the guy who brings a homemade cake to celebrate each co-worker’s birthday. There’s the marathoner who trains every day. And then there’s the fellow who wears the same sweater every day, eats lunch alone and refuses to chip in for the annual office party.

Colleagues might speculate that he’s a little off, maybe even suffering from depression or some other psychological problem. But there’s a vast difference between odd behavior and a mental disability, says Scott Tiedemann, an attorney with Liebert Cassidy Whitmore in Los Angeles who specializes in employment issues.
Read the article